That Buck Is Onto You 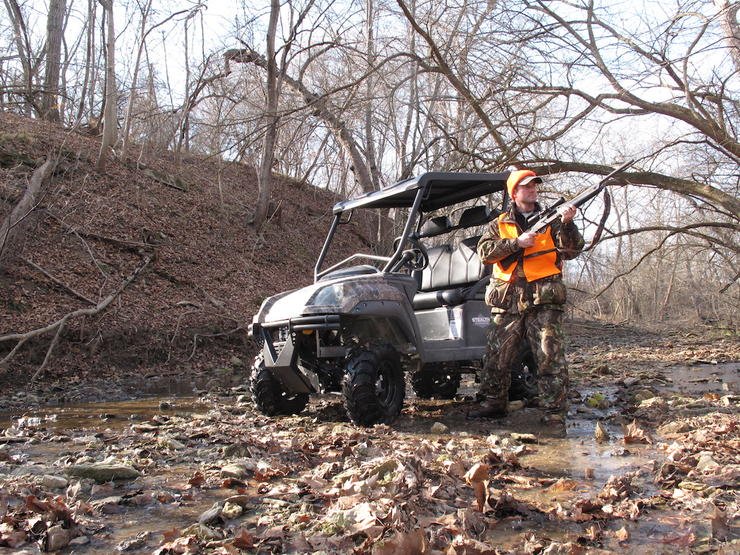 Pressured deer are cagey, reclusive and downright difficult to hunt. But once deer season opens and other hunters are piling on the pressure, it can be nigh impossible to find a deer that isn’t wary. Yet, there are certain tricks you can use to even the odds. Here are six...

We all have one. You know, the stand where you tend to go more than any other because it’s on a really gorgeous ridge and you just have a good feeling about it. But forget about what you like about it and think instead about how often you (or other hunters) go there.

Odds are, it’s time to stop hitting it so hard. Don’t give up on the stand, but give it a rest for a couple weeks, if time allows. Deer pick up on your presence when you head afield (even if they don’t bust you while you’re hunting) and change their patterns accordingly.

Don’t just minimize impact near your stands: consider your entire hunting property and cut down on scent, noise and travel. On our farm, once the plots are in and growing, we cease all but the most essential vehicle traffic. The only driving occurs on the driveway, although we allow golf-cart access to a few distant stands. Fortunately, our property is relatively flat, with a good network of logging paths, so quiet electric carts work best.

When you’re walking in for a sit, wear rubber boots to cut down on scent and avoid grabbing or brushing against limbs. Wear quiet clothing and muffle any loose gear. Avoid stepping on sticks. Use a garden rake ahead of time to clean out trails for silent access wherever possible. If you’re walking in with a buddy, don’t talk to each other. If you can cut down on sound and scent, you’ll spook fewer deer.

Use a Spartan cell camera to scout an area without pressuring it. (Spartan photo)

Every time you roll in to check trail cameras, you generate a detectable presence. Invest in cellular cams like the Realtree Edge Spartan GoCam 4G/LTE to cut down on card-pulling trips. You can even get external boxes to extend battery life. Strategically placed cameras let you monitor an area without pressuring it until a target buck appears.

Don’t enter a preferred hunting area from the same direction every time. We tend to use the same route to enter because good access is hard to come by, but the more options you have, the better. Over time, deer learn that sounds from that direction can mean danger. They’ll be gone before you ever settle into your stand.

Instead, walk farther – even if it means taking an indirect route. Deer pay attention to vehicle engines shutting off, doors slamming and human footsteps. Park plenty far from where you plan to hunt and take a trail that doesn’t follow a straight line from your vehicle.

When you find the perfect route, be punctual. Where I hunt, my neighbors typically arrive to their stands late. I can’t count how many times I’ve gotten settled in only to hear a truck rolling up, followed by the sound of deer fleeing through the swamp. Those deer are gone before the hunters even park.

Change up your routine and keep that big buck guessing. (Doug Howlett photo)

Work sucks, but most of us are on the job Monday through Friday. That means the deer woods are often crowded with weekend warriors who create intense pressure on wildlife. Learn when hunting traffic is lightest on your property and on the neighboring parcels. Study the weather for approaching fronts. Then, cash in a few strategic vacation days. They can pay much bigger dividends.

Don’t just pattern deer – pattern other hunters. Pay attention to when and where exactly they hunt. Plot these locations on an aerial map and you’ll start to notice untouched areas that stand out. These locations are typically the hardest to get to and the hardest to set up on. That’s why no one else hunts them, but this is also where the deer will be. They’ve learned these overlooked spots are unpressured sanctuaries. But if you crack the code on hunting these overlooked areas, your success will skyrocket.

Bringing It All Together

It was the day after Christmas (a Tuesday), and the deer hunting in southeast Virginia had slowed to a crawl. It was week six of a seven-week season and we hadn’t spotted a decent buck since Thanksgiving. Even doe sightings were scarce.

But I had the day off and eased into a ladder stand a few hundred yards from camp. I was running a little late and decided on the spot because nobody had hunted it in a week. Another stand nearby got pounded by hunters every weekend: It was surrounded by great cover, and the plot we planted back in August was popping. It had been productive in the early season but other hunters quickly realized this, especially the older ones with limited mobility. So I hadn’t even given that stand a thought that evening.

From where I sat, I could just see that plot. Tired of staring at the empty plot before me, I glanced back at the pressured plot. I caught a glimpse of white moving against the green: antlers.

Raising my binos, I watched a wide-racked 8-pointer amble into the plot and walk within 10 yards of the shooting house where, every Friday and Saturday, one old man or another sat, returned, and complained about seeing nothing but does.

But tonight, a big buck fed peacefully in the middle of the plot. I watched him until dark, then slid from my stand and hatched a simple plan for my next hunt.

That weekend, another hunter sat in the shooting house. True to form, only a couple of does emerged. Following my hunch, I took off work Tuesday. I was the only one at the farm, it was the final week of the season and nobody had hunted since Saturday. I headed for the plot where I’d seen the buck. But instead of sitting in the shooting house, I climbed into a vine-laced ladder stand in a lone oak at its edge. From there, I could see the shooting house, the plot and the lane approaching it.

Just after the sun dipped below the trees, the 8-pointer slid from the pines behind the blind. He stepped quietly from the trees, checked the shooting house and marched into the brassicas. My slug gun dropped him seconds later.

That buck had been smart. And in that week, he taught me quite a bit. He knew when hunters came and went on that farm, and when they sat in that shooting house. He heard them walk or drive their golf carts. He smelled their scent when they invaded his area. He probably even heard them pop the shooting house door closed. He’d learned our pattern and used it to his advantage. That is, until one hunter broke from routine and patterned the buck instead.