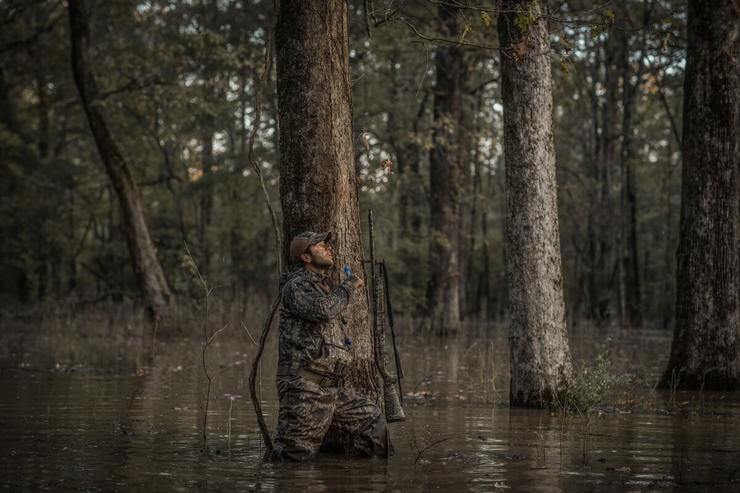 When it happens, the feeling is indescribable. Watching a wad of greenheads weave down through the canopy and land at your feet. Hunters hugging old oaks their grandfathers could have leaned against. The freedom of running your duck call as hard and fast as you want without fear of blowing out birds, provided they aren’t right over the kill hole.

Seeing that happen requires living and hunting by a few specific rules. We asked some longtime timber hunters what you can do to have a morning to remember in the penumbra.

Dennis Loosier, better known as "Dr. Duck," is a public timber hunter. His success varies, but it’s not for lack of effort. He and buddy Billy Campbell, co-hosts of Realtree365’s new program Black Cloud, scout relentlessly. That coupled with time in the woods leads to some phenomenal greenhead shoots, but the key is putting in time, seeing where birds are going, and trying to access that spot the next morning (in the dark). It’s not easy, and most inexperienced folks struggle, which is why Loosier suggests newbies go with an experienced guide service such as Ole’ South Outfitters (olesouthoutfitters.com).

A guide can teach you the ins and outs of how to call, scout and set decoys. If you don’t go that route, be ready for a trial by fire. In the famed public woods of Arkansas, the morning rush to a duck hole can be treacherous, so you’ll want to learn the lay of the land if you’re hunting a wildlife management area or national wildlife refuge for the first time. Plus, it’s beneficial to know the rules of the site, which can differ depending on location.

“All the Arkansas WMAs have a different way of doing it,” Loosier said. “Some have you sit at the river gate in the boat, and some have you just unload the boat. There are shotgun shell restrictions, and motors can only be certain sizes. My advice is to really read up.”

Scouting public timber is tough, and even when you do your homework, it doesn’t always work out. Other hunters might spook birds on their scouting missions, or the mallards might just decide not to cooperate the next morning. But you must do your diligence.

“I watch where the birds are going as best I can, and then I walk ridgelines (where the water meets dry ground),” Loosier said. “I’ll try to get as close as I can, dragging my feet on the forest floor if I am in the water so I don’t make as much noise.”

Loosier said sunny days are best, especially when you can hide in the shadows of the trees with a stiff wind. And you must blow that call so birds know where to land. In the woods, louder is better when mallards are trafficking overhead. Dial it down a bit when they’re on the string, and don’t hammer them with the call when they’re over you. Jerk rigs are of paramount importance. You need to give your decoys life, and pulling that string gives ducks a better presentation. But as with the call, don’t jerk the rig when ducks are flying overhead.

“Some ducks like the decoys in the hole, some like the decoys on the edges,” said Loosier, who uses mallard floaters almost exclusively. “If we’re hunting 10 guys, we will use four or five jerk strings. It’s a lot of hard work, but it’s what we live for.”

Charlie Jones’ favorite tactic for killing greenheads in the timber? “The best thing is when you get some fresh birds,” he said jokingly. “But besides that, years ago, I was taught the basic principles: Call at them hard on the corners. When they’re coming in, work the call a little easier.”

Jones hunts mostly private ground in Mississippi, a state that doesn’t have many public options. He and friends used to finesse-call more birds in the 1990s, but now it takes more aggression to hold a mallard’s interest.

“I’ve noticed those cutdown calls seem to get a greenhead’s attention but don’t seem to finish them,” Jones said. “My advice is to use a mid-range call and pick your spots. You really have to read the birds and know what they want that day.”

One of the most important aspects some new hunters overlook is the canopy. You can scout and work hard, but if birds can’t get through the trees, or there’s an easier way to get through the timber nearby, ducks will take the path of least resistance. So before you chuck a decoy, look up to see if birds can cup in.

“You especially want a clear canopy when you’re working a large volume of ducks,” Jones said. “When they mob up, if one goes into a spot, the rest are likely to follow. That’s when having multiple good callers helps to keep their attention.”

Jones said timber hunts involve shooting birds in close quarters, so an open choke and shotshells with high pellet counts work better than that rusted-in extra full choke in your pump and a box of No. 2s. Improved-cylinder and skeet chokes with Nos. 5 or 6 shot will kill birds just fine, and it’s a great opportunity to shoot a 20- or 28-gauge.

“In the woods, you are typically shooting right at the birds — there’s no lead,” Jones said. “And it takes some people a while to get used to that. I’ve seen plenty of point-blank misses in the timber.”

Jimbo Ramsay has hunted green timber for 30 years in the shadow of Arkansas’ famed Bayou Meto. Club members rotate between three small holes, so they don’t use many decoys. Instead, they emphasize calling and jerk rigs.

“We actually leave the decoys out all year, because in that size of a timber hole, I don’t think birds are seeing the decoys much,” Ramsay said. “I’ve got jerk rigs tied to the trees so we can create motion, and that’s what the mallards are looking for.”

Years ago, the club instituted a policy that hunting had to end by 10 a.m. Ramsay, 39, was in college then and didn’t like the new rule, but it has kept pressure off birds and made for better hunting, even in years with nontraditional migrations.

“There’s a lot more agriculture in Arkansas than there was in the 1950s and ’60s, and that has changed the reason why ducks come to the woods,” Ramsay said. “I’m not a biologist, but we are seeing more mallards with more rice and soybeans in their craw than acorns, so they are coming here to loaf more than feed.”

Though the club rotates holes for hunting, Ramsay isn’t afraid to deviate from that plan, especially in January, when mallards start to search for heavier cover. Ducks have been shot at for months and look to escape pressure, so he will go into areas most hunters would not.

“I look for places you wouldn’t want to walk through,” he said. “Just like deer, as the season gets later, ducks try and find the thickest stuff they can to hide in.”

Reading ducks comes with experience, but you can key on a few simple things when working flocks. If mallards are moving their heads, that typically means they are looking for the hole, so keep using feeder calls and tug the jerk rig provided ducks are not over you. And if you see a group drop altitude 100 yards away, hit the call hard to keep them from stopping short.

“The jerk string is key,” Ramsay said. “I can’t think like a duck, but if it were me and I saw something slapping around on the water, I’d think there must other ducks down there.”