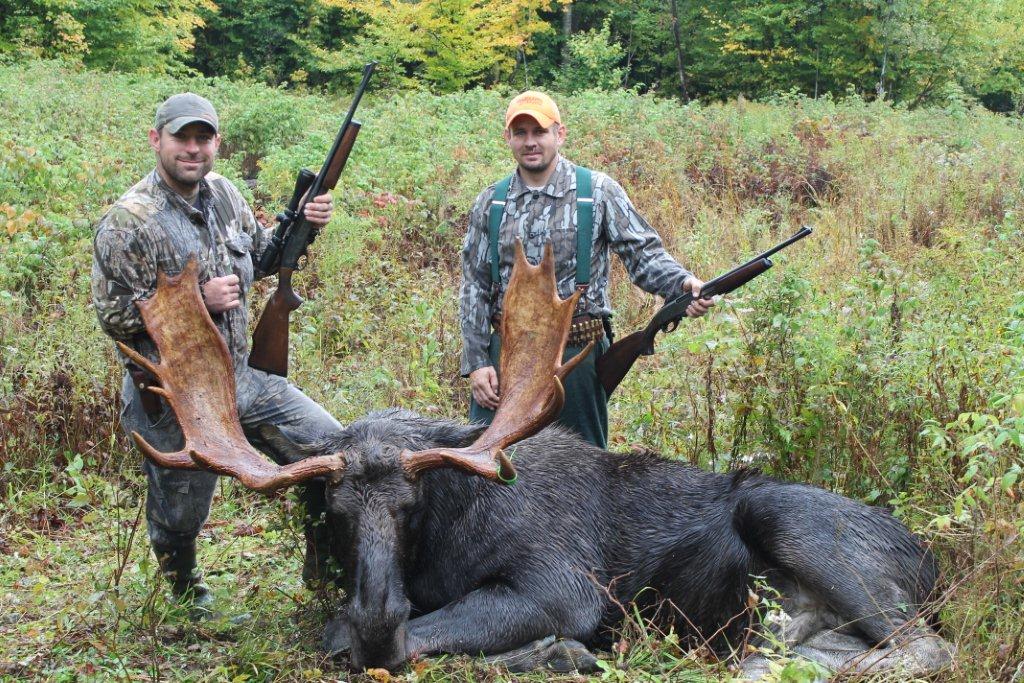 Maine is one of the few places in the continental United States to allow moose hunting. However, to hunt moose in Maine you must draw a tag in the annual moose lottery. I have been a licensed Maine Master Guide for 20 years now, and in that time, I have helped many moose hunters who were fortunate enough to draw a tag. I would like to share the story of a 2014 moose hunt.

Maine is one of the few places in the continental United States to allow moose hunting. However, to hunt moose in Maine you must draw a tag in the annual moose lottery. I have been a licensed Maine Master Guide for 20 years now, and in that time, I have helped many moose hunters who were fortunate enough to draw a tag. I would like to share the story of a 2014 moose hunt.

The annual moose draw happens in June, and the day of the draw in 2014, I scanned the list of recipients to see if I recognized anyone I knew.  As luck with have it, I did.  I saw the name Brant Hall from New Jersey who had hunted black bear with me a year or two previous. Even more fortuitous was the fact that we both drew tags in the same zone during the same peak rut week. Having just spoken with Brant about his good fortune, I called my friend Kyle Purington from southern Maine. I was in hopes of renting his wall tent since the zone Brant and I had drawn was in Maine’s North Maine Woods area, and would necessitate setting up a remote camp.

We formulated a plan to all hunt together. I contacted my friend Pieter Huebner, who owns Off-Grid Enterprises, LLC from Norman, Oklahoma to be my sub-permittee and to join us on the hunt.  Over the next few months, I worked through the logistics of food and gear that needed to be purchased for this remote hunt.  We would be nearly 70 miles from the nearest store when we headed off to find our three, bull moose.  Our hunt would begin on September 21 and we had six days to fill our tags.

Over the years as an outfitter I have learned that scouting is absolutely essential to having success during the actual hunt.  We decided to head up the week before the moose hunt to find a place to set up our remote camp, as well as to scout for bulls in the area we would be hunting.  During the early morning and late afternoon hours I would call bulls imitating the sound of a cow moose in heat. Sometimes the bulls would run right in, other times they would answer.  Either way, I marked that information down in my notebook, so I would have options the following week.  After several days of scouting I had a dozen or so, home areas of bull moose identified.

We all woke up in the predawn darkness on opening morning and worked our way deep into the woods calling and listening for responses from willing bulls. The first hour or so we heard no responding calls from bulls answering the wailing sounds of cow moose I was using to entice the bulls into our field of view.  I decided we should head back to the truck and drive a short distance away to an area where I had called a bull out of the woods the week prior.  We parked the truck and walked quietly about a mile to where I felt the bulls core area was.  I then positioned Brant in some brush with a good view of an opening in which I hoped to call the bull.  Over the next several minutes Brant watched the bull emerge from the tree line and slowly close the distance towards the sounds of the cow he could hear. I can still remember as if it were yesterday, the crack of Brant’s rifle followed by two follow-up shots and his joyful whoop when the bull fell to the ground.

I left Brant and Piet with the bull and hiked back to my truck so that we could load the bull into it and head back to camp. We arrived back at camp prior to noon where we met up with Kyle and his crew.  They too had taken a nice bull and were back at camp with it.  Here we were on the first day of the hunt having filled two of three tags with mature bulls.  We were fired up.  I loaded both bulls onto a trailer and we headed to the game check station where the bulls were officially tagged.

We then headed back to camp where we arrived around mid-night.  Piet and I strategized along the ride on finding a bull for us.  Our first location we hunted for the morning we had a bull answer me, but try as I may, I could not pull him closer to us.  I decided we should try to get closer to him.  We hunted that bull for the next few hours and just could not get in a position to see him.  The week prior I hiked back into the woods and let out a couple of cow calls and had not one, but two distinct bulls answer that call.  I had hopes that one or both of them would still be in the area. When we got to the area, I positioned Piet for what I hoped would be a shot opportunity.  In less than a minute, the distinctive sounds of a large and excited bull was heard by the both us.  I could tell the bull was close, but he stopped in dense cover and was not coming any closer. I then imitated the sounds of another bull and he charged right in to meet that challenger.  From my location I could see his antlers, as well as Piet raising his rifle.  I watched the bull, then Piet.  Piet, then the bull and then finally the roar of the rifle then the bull whirled and dropped to the ground as the 375 Ruger had found its mark.  Piet and I approached the bull as it expired.  What a bull it was.  It had a huge set of antlers with the whole package, points, width and paddles.  In two days, our crew had taken three excellent bulls, with Piet’s being the largest of the three.  What an incredible hunt and memory for everyone involved.

If there is any advice I can leave you with, if you are planning a Maine moose hunt, is to do your homework. If we had not scouted prior to hunting, I am 100 percent certain that we would not have been successful in our quest. If you are not in a position to do your own scouting, then I would strongly suggest working with a registered Maine guide that does his homework.