Spring Can Produce The Triple-Play 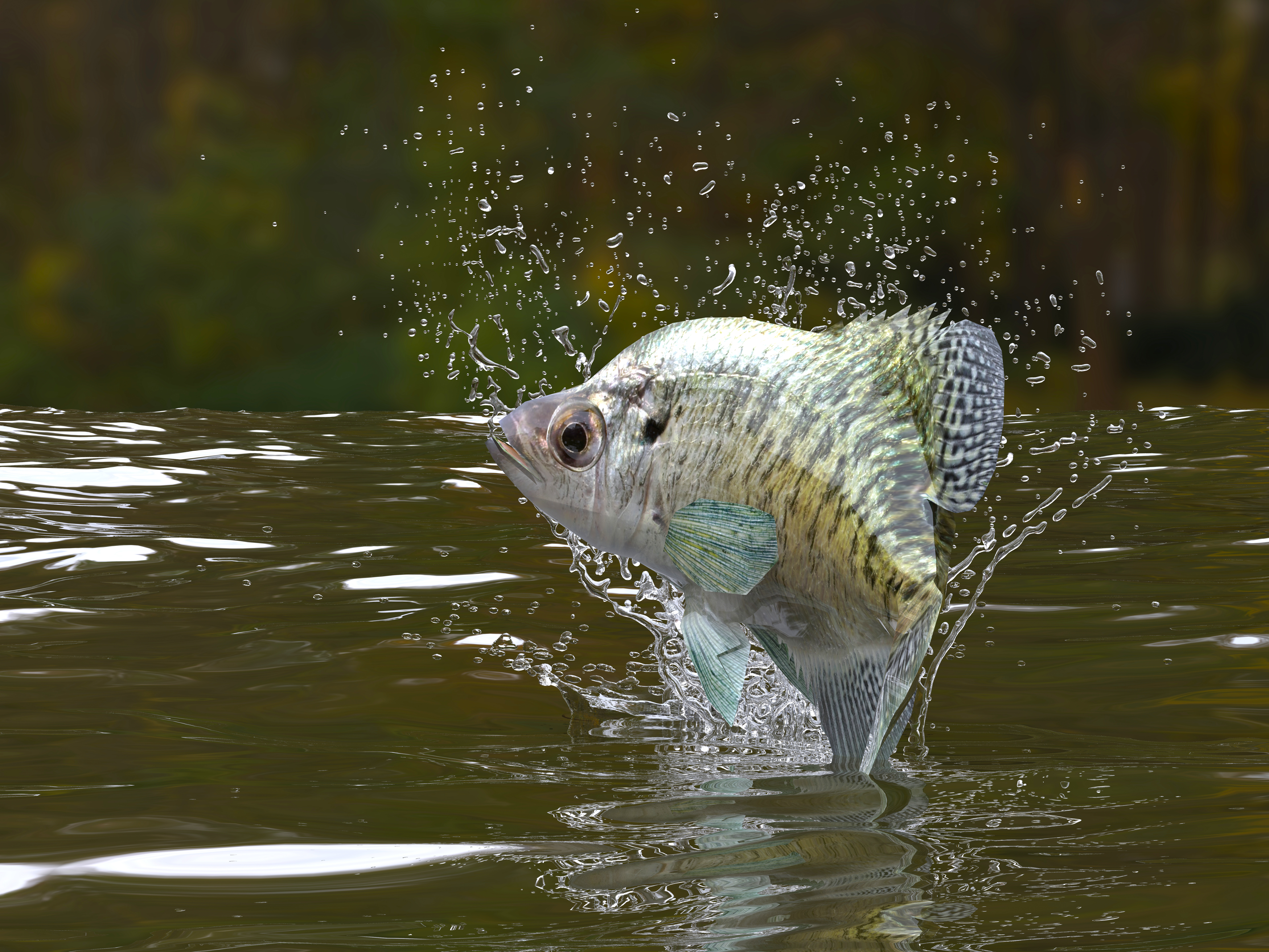 PRIME TIME TO HARVEST MORELS, CRAPPIE AND TURKEY Missouri is unique in its ability to produce three highly sought after species in the month of April. Known as the springtime trifecta for an avid outdoorsman is finding morel mushrooms, catching crappie and hunting eastern wild turkeys. If you are overly ambitious, it is possible to accomplish all three of these in a single day, but you would have to rise early and work hard the entire day. Most outdoors enthusiast put these big three items on their bucket list to harvest during the Spring.

Missouri is unique in its ability to produce three highly sought after species in the month of April.  Known as the springtime trifecta for an avid outdoorsman is finding morel mushrooms, catching crappie and hunting eastern wild turkeys. If you are overly ambitious, it is possible to accomplish all three of these in a single day, but you would have to rise early and work hard the entire day. Most outdoors enthusiast put these big three items on their bucket list to harvest during the Spring, which is very obtainable.

All three of the above mentioned species are elusive and take preparation as well as focused attention to capture them. Morel mushrooms for example are typically found on the forest floor or in vegetation areas and amazingly enough you can be standing right next to them and not see them at first glance. It requires preparation and attention to detail, as does fishing for crappie and hunting the ever cautious gobbler. Let’s talk about each one and provide tips on how and where to find them this season.

Fishing for Crappie: can be one of the most relaxing and enjoyable water activities in the state of Missouri. Two species of crappie are common – white crappie and black crappie.   The best time to find crappie is when they are spawning. The fish will migrate up into more shallow water to spawn and this routine typically begins as early as mid-March in the southern part of the state and into late May in far northern Missouri. This pattern has a lot to do with the temperature warming up as we conclude winter and enter springtime. The spawn generally occurs when the water temperature reaches 55F degrees.  The depth at which crappie spawn depends a lot on water clarity. If the water is muddy or cloudy, crappie may spawn at a very shallow depth sometimes only 1 or 2 feet, however if the water is exceptionally clear, they will typically spawn at deeper depths of 15 feet or more.

Crappie can be found in lakes, ponds, rivers and streams, and in most cases the way you fish for them remains the same. Most avid anglers that are experienced in fishing for crappie will flip a small (1/32 to 1/16 ounce) jig in a variety of colors into the shallow water along the shore. Make sure to move the jig slowly and popping it erratically (dancing it), while targeting areas around the rocks, wood piles and vegetation areas. The use of sonar or fish-finders is helpful because it can show the depth of where crappie are holding. If you can find pea-gravel areas around the bank, these are also prime spawning locations. Many of Missouri’s lakes will have underwater structure that has been placed there by the conservation organizations or local fisherman, such as old cedar (Christmas) trees. These known structures make prime habitat for crappie in lakes and ponds. Crappie travel in schools so once you locate them, keep fishing that area until they stop biting or if your just not finding any that are large enough to keep. Remember to check the size & quantity limits for the area you are fishing. If a spring cold front sends crappie out to deeper water, concentrate on steep banks. Crappie won't be very far off the bank unless cooler temperature changes chase them back to deeper water. Crappie fishing is a fun and exciting family activity, but now let’s talk about hunting for Gobblers.

Hunting wild turkeys: can be a labor of love and the ultimate game of hide and seek. Missouri is home to the eastern subspecies of wild turkey, one of five subspecies native to North America. Most areas of the U.S. have some species of turkey and in the State of Missouri it is the Eastern Wild Turkey, also known as (Meleagris Gallopavo Silvestris).  Thank god nobody has to remember that name to get a turkey hunting permit… The five subspecies in America are the (Eastern; Osceola; Rio Grande; Merriam; Gould’s) but the type we will discuss is the Eastern Wild Turkey in Missouri. Mature male turkeys are called “Toms”, young males are “Jakes”, and the females are referred to as “Hens”.

Wild turkey hunting can sharpen a stalkers skills and finding turkey can initially start with listening more than watching for them. The gobble is a noticeable sound and once you have heard it, you will remember it. When standing in the middle of a timbered area, it is difficult to pin point their first call, but be patient and track them by sound to get the general area they are located. Use a turkey call to respond back, to keep them gobbling.  Scouting and locating turkey is the first step to a successful hunting season. Secondly, if you can roost a turkey (track them until they go to bed down in the trees), then you will know where to hunt the next morning. One thing to understand about spring time turkey hunting, is once you locate the hens (females), the toms (males) will not be far behind. April is within mating season and as you can guess, they are a little more aggressive and a lot more preoccupied, which greatly improves your chances of getting the trophy bird you are chasing.

Wild turkeys can actually see in color and they have excellent daytime vision. Their vision is over three times better than a human's eyesight and it they have a vision field of 270 degrees. Turkeys have poor vision at night however, and as the sun sets they are preparing to fly up into the trees and bed down (or Roost) for the night.  So…. Camouflage and concealment is a must when turkey hunting. If you have ever wondered why every inch of a hunter and their shotgun, bow, and equipment is covered in some type of a camo breakup pattern, now you know. Calling turkey in the real excitement of the sport and the types of turkey calls you can use range from (diaphragm mouth calls, box calls, slate calls, wingbone calls, and several others). Also, the use of decoys are of huge advantage, keeping in mind that mating season is going on and the Toms are looking to find a partner. If properly done, wild turkeys will walk right up to your decoys and can be called in by a skilled hunter.

Where to find turkey typically depends on the area they are located in. According to the National Wild Turkey Federation, wild turkeys generally move 1 to 2 miles per/day, depending on habitat and the distance they have to travel to food and water sources. The typical home range that wild turkeys will migrate across on an annual basis can vary from 400 to 1,300 acres and generally contains a mixture of trees and grass cover. Their home area can be influenced by things like terrain, provisions (food, water, cover) and also by the amount of hunting pressure the area receives. Obviously the more human activity and disruption there is in the immediate area, turkeys will move further away to a quieter location. Turkey hunting is the most challenging out of the Missouri Trifecta, but also can be the most rewarding due to the amount of preparation and stalking the sport requires. If we’re going to prepare a turkey to eat, then we might as well find some Morel mushrooms to go with our meal… let’s talk about where to find them.

Finding Morel Mushrooms: is like a needle in a haystack, unless you know where to look. Amazingly enough, there are certain types of terrain, trees and soil types to contribute to the growth and development of morel mushrooms. First off it is important to know that morel mushrooms are looking for the following requirements before they are willing to make their appearance (temperature & moisture), so that is the starting point to a successful hunt.

Morel mushrooms are pretty finicky and do not like to sprout if the ground temperature is too warm or cold. In addition, morels like the soil to be moist, so if late winter has a good bed of snow or if it has been raining recently, this creates an ideal environment for mushroom growth. Late March and early April are prime months to hunt and harvest morel mushrooms. In early spring they tend to pop up at the lower elevations first, then work their way up the hillside as the temperature rises. Also, ground that has been disturbed such as clear cutting or has been burnt off by a natural fire or a prescribed burn seems to produce more activity in morel growth.

FINDING MORELS can be tricky but some of the best places to locate them are in moist wooded areas along river bottoms, and on the south facing slopes of hills. Also, look around standing or dead trees, particularly (ash, elm, oak, and aspen) as these tend to net a higher population of morel mushrooms.

Lastly, stay safe and make absolutely sure that you are not picking and preparing to eat a mushroom that is poisonous or dangerous. As with any wild edible, you have to be sure you can identify morel mushrooms before picking and eating them. It is not generally difficult to identify a Morel mushroom especially if you have picked them before, however, morels do have poisonous look-alikes. If you have ever heard the term "false morel" this describes a few species of mushrooms that contain a toxin known as monomethyl hydrazine (MMH). The same chemical found in certain rocket fuels and it can cause dizziness, vomiting, and in some extreme cases even death. There are two primary features that help identify a morel mushroom, the cap shape and whether the interior is hollow. Morel mushrooms have a distinct cap shape that is fairly uniform and appears ridged and pitted inwards. Most morels will have the cap attached to the stem and not hanging free, like several other mushrooms. Overall, the key to being safe is, “if you’re not sure find out before ingesting any mushroom”.

In Conclusion: the springtime in the State of Missouri has a lot to offer, not to mention this is one of the most beautiful times of the year with the trees in full bloom and wildlife coming out from a long winter. Get outdoors and enjoy this time of year, regardless of what state you live in.

If you would like to further discuss how to get the most out of the spring triple-play or to find the Missouri or Kansas hunting property you've been searching for, contact Realtree United Country Land Pro Shawn Terrel.